Priests, following the Rite of Ordination, seek to lead God’s People in Love, nourish them by the Word and strengthen them through the Sacraments. Currently, the parish is served by three religious priests, Rev.  Sesinando Cajucom, Jr., MSC,  Rev. Joseph Christy Yesudass Sunder, MSC,  Rev. Luis Alfonso Segura, MSC,  all live in the parish rectory.  We also have two deacons serving the parish. 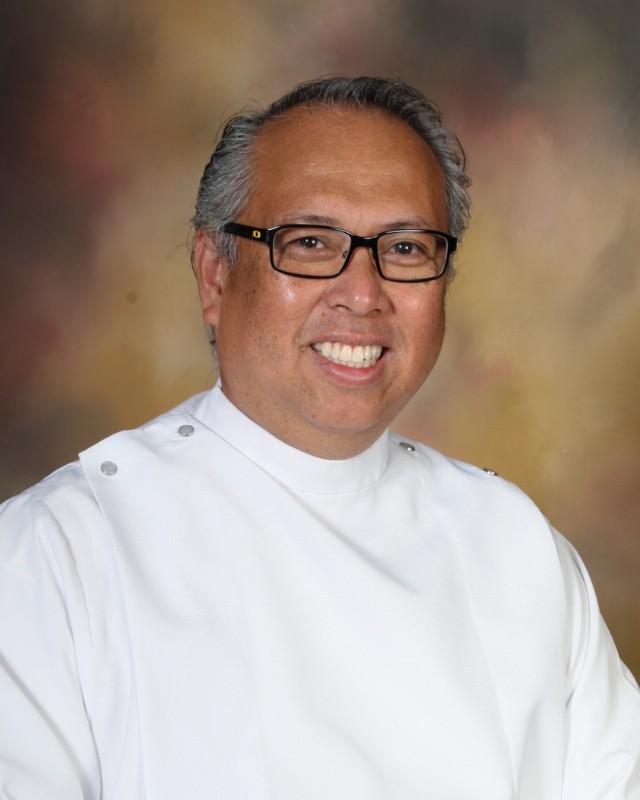 Rev. Sesinando Cajucom Jr. MSC has been a priest since 1998, and pastor at St. Catherine of Alexandria Church since July 1, 2021.

Known in the parish as Fr. Jun, he was born July 16, 1969 in Muñoz, Nueva Ecija, the Philippines to his father Sesinando Sr. and mother, Flordeliza Caymo. Most of his family live in the Philippines. Including five brothers and his mother, while his sister lives in Canada. Fr. Jun’s father passed away in 1976.

Fr. Jun entered the collegiate formation of the Missionaries of the Sacred Heart in 1985.  He received a bachelor of arts in philosophy at the University of San Carlos in Cebu City, Cebu, the Philippines.  After finishing college, Fr. Jun became a novice under Fr. Gene Sabio, MSC, former pastor at St. Catherine of Alexandria Church.  Fr. Jun professed his first religious vows on June 2, 1990, and took his final vows in 1993. He studied theology at the Loyola School of Theology in Ateneo De Manila University in Quezon City, the Philippines where he earned a bachelor’s of Sacred Theology and a master’s in Pastoral Ministry.

He was assigned to assist at St. Catherine of Alexandria Parish in 2015, while Fr. Gene was on sabbatical. He became a parochial vicar in July 2016 until his elevation to pastor in 2021. 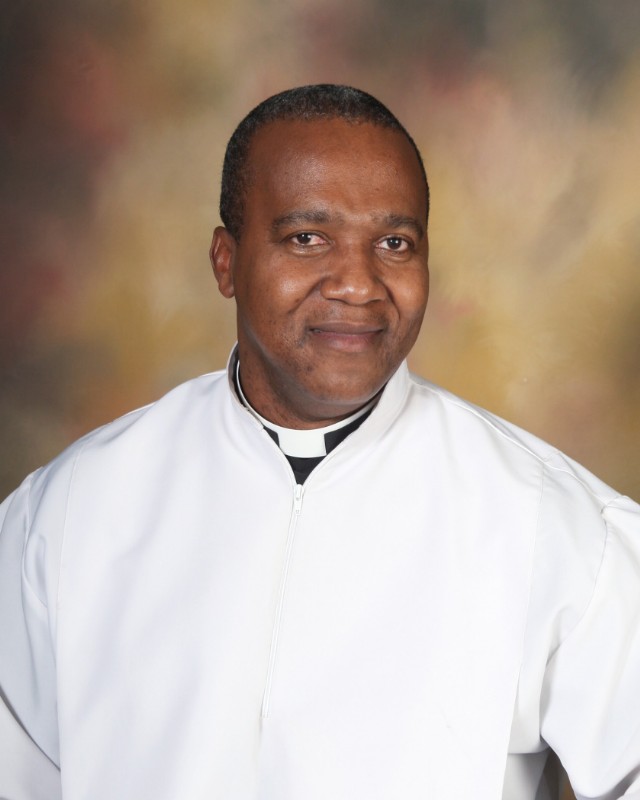 Rev. Luis Alfonso Segura, MSC, a priest since 1999, was assigned to St. Catherine of Alexandria in July 2021.

Fr. Lucho, as he’s known, was born on July 30, 1971, in Bocas de Satinga, Narino, Colombia, to Manuel Santos Segura and Graciana Ibarbo. His parents had three sons and three daughters, one of whom died in 2021.

Fr. Lucho entered the formation program of the USA Province of the Missionaries of the Sacred Heart in Colombia in January 1990, and the novitiate in August 1993. His novitiate took place in Santiago, Dominican Republic.

Fr. Lucho studied at Centro Pastoral de Filosofia (or Pastoral Center of Philosophy) in Bogotá and at the Univerdidad Santo Tomas, where he received a bachelor’s degree in philosophy and literature.  In 1995 he began his studies of theology at Javeriana University in Bogotá. He finished with a civil degree, or “diplomado,” in theology and an Ecclesiastical Bachelor of Theology. In 2006, he started work on a master’s in psychology with an emphasis in education at Catholic University in Bogotá.

Fr. Lucho’s first assignment after ordination was as assistant pastor at Our Lady of the Sacred Heart Parish in Jamundi, Colombia.  In January 2002, he began studies in formation with the National Conference for Religious in Bogotá. During the second semester he helped with aspirant and pre-novitiate students in Bogotá, Colombia.

In 2019 Fr. Segura was assigned as a parochial administrator of St. Therese of Jesus Church in Aurora Ill., and in July 2021 he was assigned parochial vicar of St. Catherine of Alexandria Church. 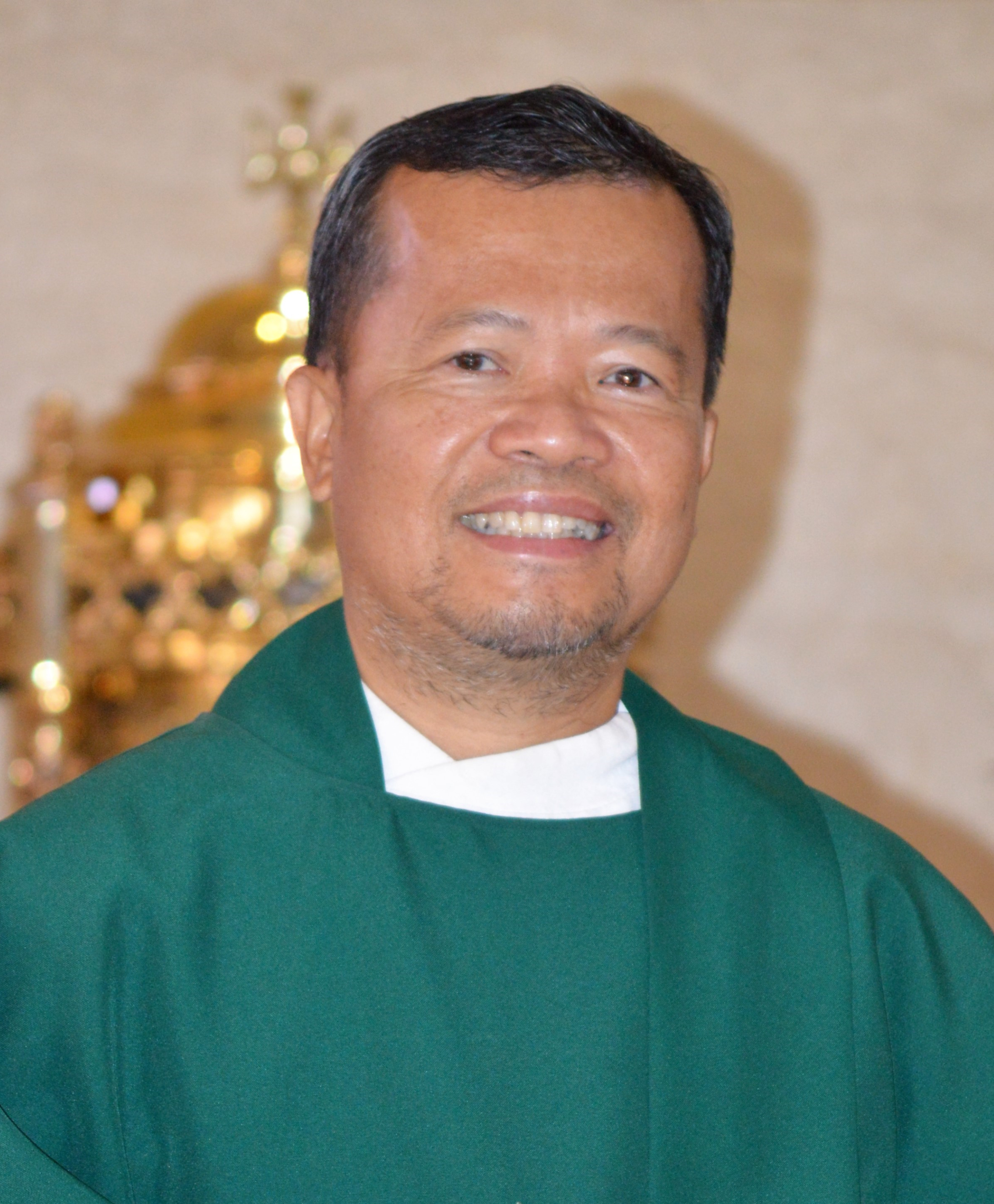 Rev. Ephraim Palma Arciga, MSC, was ordained to the priesthood in 2000 in the Philippines, and his assignment as a parochial vicar at St. Catherine of Alexandria Church marks his first position in the United States.

Fr. Ephraim, as he is known, is a member of the MSC Philippine Province under the administration of the USA/MSC Province.

Fr. Ephraim was born on March 17, 1970 in Santa Cruz, Lanuza, Surigao del Sur province in the Philippines to Pedro Veñas Arciga and Maria Aciquia Palma and was the fifth-born in a family of seven children.  He is a 1991 graduate of San Nicolas College in Surigao City on the island of Mindanao and received his bachelor of arts after majoring in English.

His path to the priesthood began with a one-year novitiate beginning in 1993 in Quezon City under novice master Fr. Generoso Sabio, MSC, a former pastor at St. Catherine’s. He studied from 1994 to 1999 at the Institute of Formation and Religious Studies and from 1997 to 1999 at the Maryhill School of Theology, both in Quezon City, on the island of Luzon. His first profession came in 1994 and his final profession in 1999.

Fr. Ephraim was ordained a deacon on Dec. 6, 1999 and entered the priesthood June 8, 2000 when he was ordained by Bishop Irineo Amantillo, CSsR, D.D. at Virgen de la Paz y Buen Viaje Parish, Surigao City, in the province of Surigao del Norte.

His assignments in the Philippines included co-pastor and ad-interim parish priest at Virgen de la Paz y Buen Viaje Parish from 2000 to 2002; and parish priest at St. Francis Xavier Parish in Pilar, Camotes Island, from 2002 from 2006. Beginning in 2006, Fr. Ephraim served in several positions aimed at encouraging vocations to the Missionaries of the Sacred Heart. He served from 2006 to 2008 as vocation promoter for Visayas at the MSC Formation Center in Cebu City.

While serving as a parish priest from 2008 to 2013 at Our Mother of Perpetual Help Parish in Lapu-Lapu City, Cebu province, he also served his first term as MSC national vocation director.

He was assigned to St. Catherine as parochial vicar for a term of three years, effective July 1, 2022. 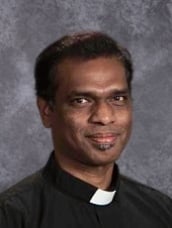 Rev. Joseph Christy Yesudass, MSC, has been a priest since 2001, and came to St. Catherine of Alexandria Church in 2019.

Fr. Christy, as he is known, was born in Bangalore, India on March 9, 1973 to parents Yesudass Sunder Raj and Mary Francina. He has five brothers and one sister. He graduated from St, Alphonsus High School, in Bangalore, in 1990. He completed his pre-university studies at St. Joseph’s College. He received a Bachelor in Philosophy degree from Franciscan College, a Bachelor of Theology from Dharmaram Pontifical College, and a Master’s in Canon Law from St. Peter’s Pontifical Institute, all in Bangalore.

He was appointed assistant formator in the pre-novitiate house in Bangalore from 1999 to 2001. Then Fr. Christy transferred to St. Mary’s Basilica Shrine as associate pastor from 2001 to 2003. From 2003 to 2005 he was pastor at Our Lady of the Sacred Heart Church, Bangalore. Later in 2005 he was appointed Superior of the Formation House for Pre-Novitiate. He was Superior of the Formation House until 2009 and was then appointed Union Superior (Provincial) for the Missionaries of the Sacred Heart in India.

In 2014 Fr. Christy came to the United States and began his parish ministry as parochial vicar at St. Patrick and St. Anthony Parishes, Watertown, NY.  He then returned to Bangalore, where from 2016 to 2018 he served as Formation Houses, Philosophy and Novitiate House Administrator.

Returning to the United States, Fr. Christy was appointed parochial vicar at St. Catherine of Alexandria Church effective on July 1, 2019. 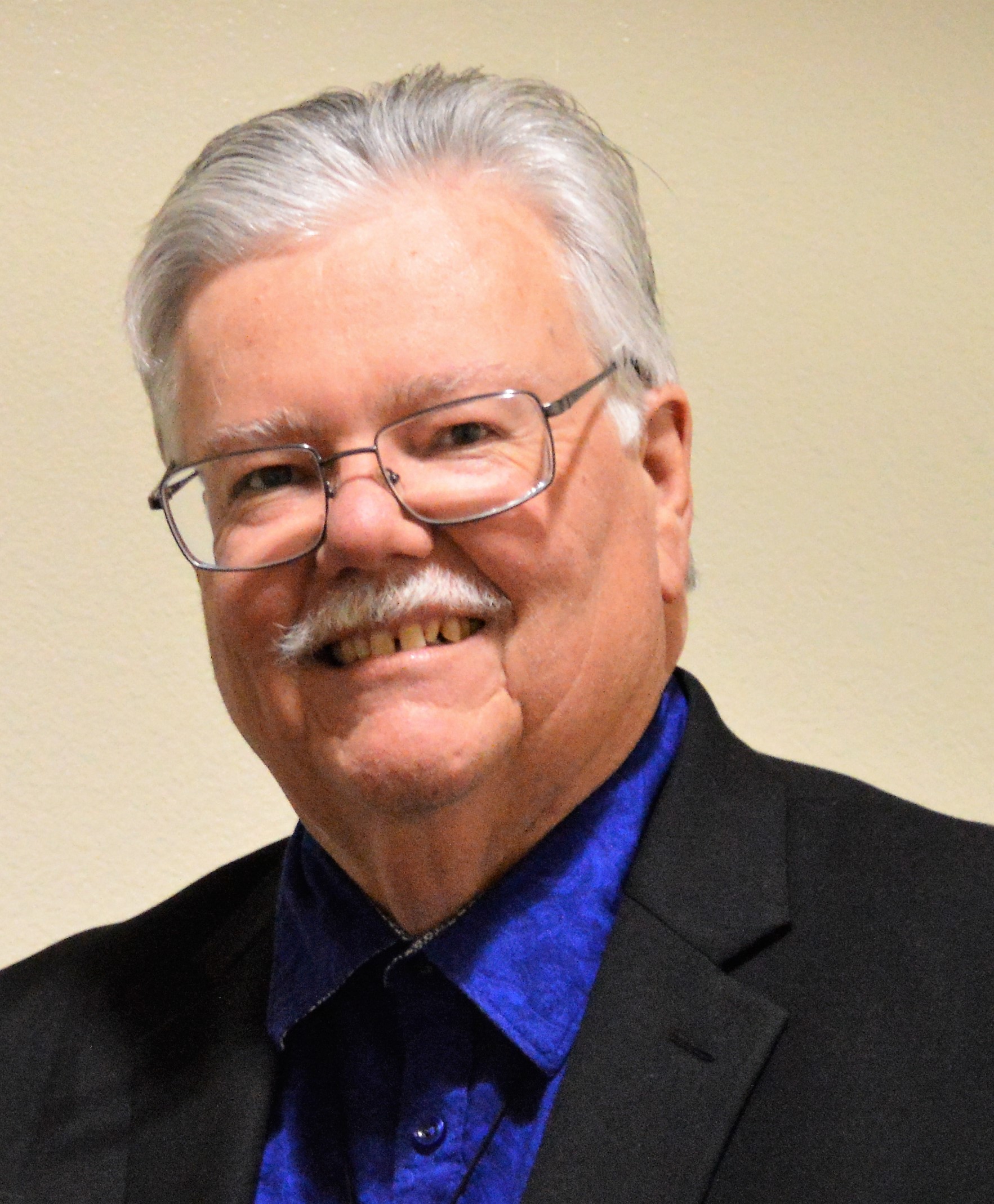 Ordained in May 2005, Deacon John De Gano is no stranger to most at St. Catherine of Alexandria. With his wife Cheryl, they have been parishioners since 1992, serving principally through the Ministry of Social Concerns (and, prior to diaconate formation as members of the RCIA team). They also minister together with Baptismal Preparation, Life Teen and Faith Formation.

Deacon John served as the Diocesan Archivist (1999 – 2005) and authored the Diocese of San Bernardino’s 25th Anniversary book entitled, ‘1978-2003: A Journey of Hope”.  He holds a bachelor’s degree in Journalism from CSU, Fresno, and when he isn’t writing, he likes to read, travel, create art, solve Sudoko puzzles, and share experiences of Jesus Christ with others, especially young people.

Deacon John attempts to daily live out his personal mission statement ‘to encourage and reconcile,’ by sharing God’s love through preaching, by welcoming the stranger, and through the joyful celebration of the blessing of throats and the blessing of the animals. 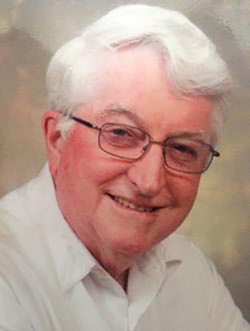 July 2014 retired from 9 years as Pastoral Coordinator of St. Patrick's in Moreno Valley. Following this, Deacon Dick left and walked the Camino de Santiago de Compostello, a 500 mile pilgrimage across Spain to pray and sort through his many years of life and ministry.

He is married to Marianne, his wife and companion as "Pilgrims of Faith" for 50 years; together they have 8 children, 7 sons, one favorite daughter, and 12 grandchildren. Their children have been their teachers and helped form them in ministry because of the myriad of experiences they shared in life. They are enthusiastic about the work of faith in all aspects of living.
Deacon Dick comes with a wide range of parish experience and education. A graduate from Loyola University with a BS in Psychology he then joined the Navy as an officer for 24 years. He has a Masters in Communications Management from the Naval Post Graduate School and a Masters in Pastoral Ministry from the University of San Francisco. He and Marianne attended the Deaconate formation program and was ordained in Tucson, Arizona in 1996. He was the Director of Faith Formation and Life Teen in their Arizona parish for several years after which they moved to Oregon for 6 years and worked at 2 parishes as a Pastoral Associate. From Oregon they came to the Diocese of San Bernardino and to St. Patrick's Parish. His ministry experiences include all aspects of parish life.

Marianne is a Catechist and animator for the Catechesis of the Good Shepherd (a Montessori approach to the faith formation of the very young). She has assisted in bringing this to 7 parishes in our Diocese and continues to do so through the Office of Catechetical Ministry along with Deacon Dick. Retirement from full time work has given them the time needed to strengthen their relationships with their family for which they are grateful.