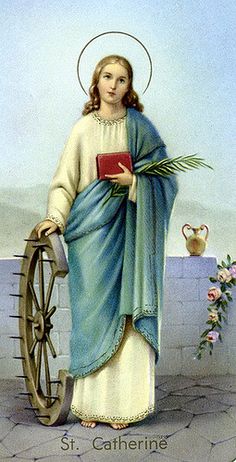 Saint Catherine of Alexandria is a canonized saint in the Catholic Church who, per Christian tradition, was martyred around 305 in Alexandria, Egypt. Of course, the Church of the first Millennium was undivided. She is also recognized as the Great Martyr and Saint by the Orthodox Church.  The young saint was born around 287 in Alexandria, Egypt. At that time, Alexandria was one of the finest cities in the world, and a center of learning and culture as well as faith.

Christian tradition states she was of noble birth, possibly a princess. As a member of the nobility, she was also educated and was an avid scholar. Around the age of fourteen, she experienced a moving vision of Mary and the infant Jesus, and she decided to become a Christian. Although she was a teenager, she was very intelligent and gifted. When the emperor Maxentius began persecuting Christians, Catherine visited him to denounce his cruelty. Rather than order her execution, Maxentius summoned fifty orators and philosophers to debate her. However, Catherine was moved by the power of the Holy Spirit and spoke eloquently in defense of her faith. Her words were so moving that several of the pagans converted to Christianity and were immediately executed.

Unable to defeat her rhetorically or to intimidate her into giving up her belief, the emperor ordered her to be tortured and imprisoned. Catherine was arrested and scourged. Despite the torture, she did not abandon her faith. Word of her arrest and the power of her faith quickly spread and over 200 people visited her. According to some legends, the emperor's own wife, Valeria Maximilla was converted by Catherine. The emperor eventually executed his own wife over her conversion. However, this is not mentioned in the historical record and may be a legend. It is believed that Maximilla was alive and with her husband at the Battle of the Milvian Bridge in 312, seven years after the death of Catherina. Following her imprisonment, Maxentius made a final attempt to persuade the beautiful Catherine to abandon her faith by proposing marriage to her. This would have made her a powerful empress. Catherine refused, saying she was married to Jesus Christ and that her virginity was dedicated to him.

The emperor angrily ordered her to be executed on a breaking wheel. The breaking wheel is an ancient form of torture where a person's limbs are threaded among the spokes and their bones are shattered by an executioner with a heavy rod. It is a brutal punishment that results in a slow and painful death, normally reserved for the worst criminals. When Catherine was presented before the wheel, she touched it and a miracle occurred that caused the wheel to shatter. Unable to torture her to death, the emperor simply ordered her beheaded.

One account claimed that angels took her body to Mt. Sinai. In the sixth century, the Emperor Justinian ordered a monastery established in her name. The monastery, Saint Catherine's, remains to this day and is one of the oldest in the world.