One God, One People in Christ, One Community of Love, guided by the Holy Spirit to impact lives.

When Fr. Joseph Murphy, CS Sp, an army chaplain(and member of the Holy Ghost Fathers or 'Spiritans'), arrived in Riverside in 1945 to establish a 'mission' parish to minister to the needs of seventeen black families living in the area, he didn't know what to expect. His endeavors to purchase property and have it rezoned for a Catholic church were met with both religious and racial prejudice when 34 'concerned' citizens signed a petition to keep the Catholics out.

Fr. Murphy did not give up. He solicited the support of the pastor of St. Francis de Sales and together they convinced the City Fathers to overrule the petitioners' objections and the Church of the Holy Ghost (as St. Catherine was called then) was established in 1946. The first services were held on Pentecost Sunday in the barn, with those in attendance going to the Mission Inn for breakfast. 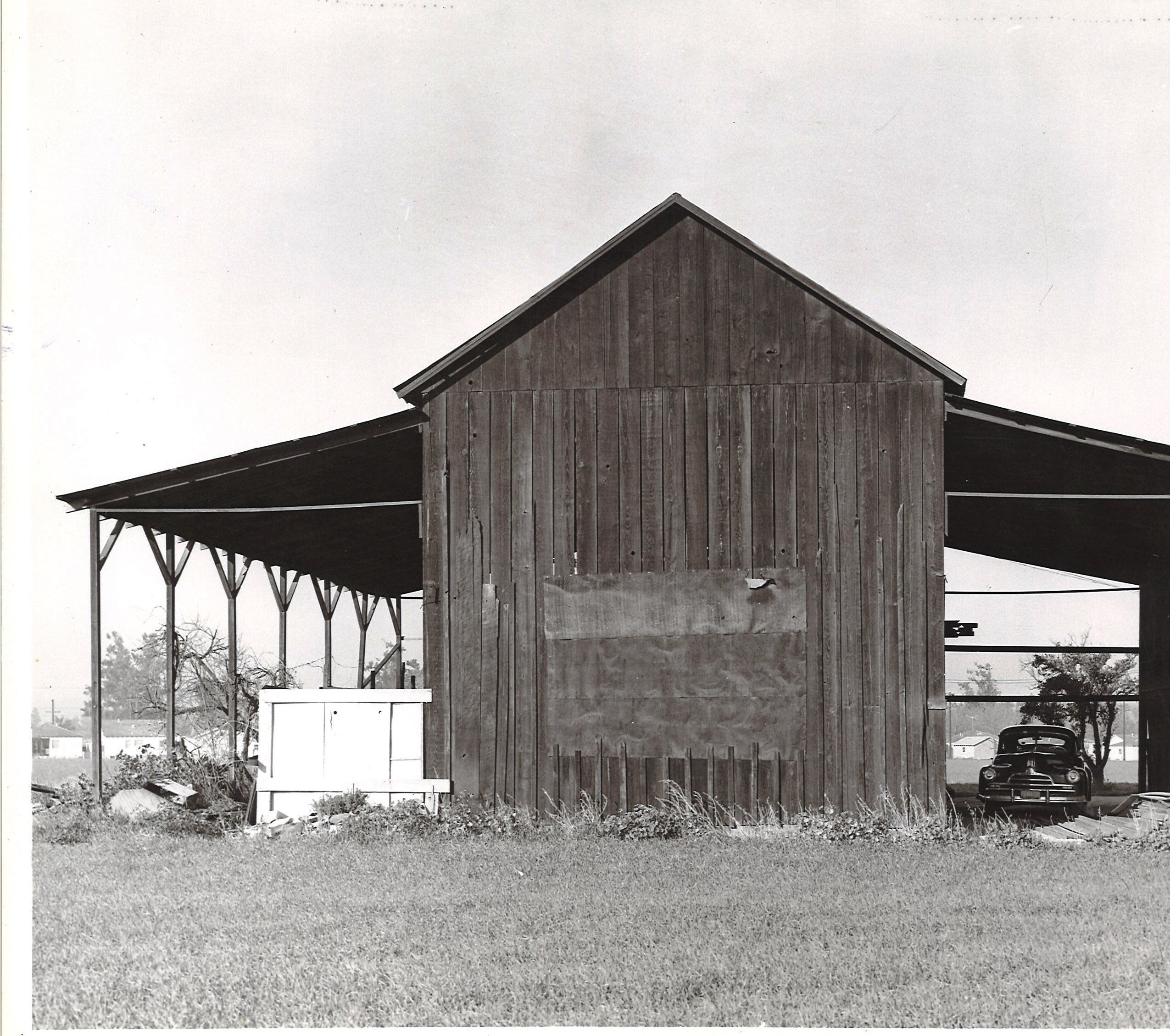 In exchange for the zone change, Fr. Joseph Murphy, CS Sp, had to agree to dedicate a swath of land to the City (bisecting the church parcel in two) and it was to be named Mary Street. However, because the City wanted to promote a new business district (the Brockton Arcade), the name was changed to Brockton Avenue (north of Indiana Avenue). A building moratorium was in place during the war years, so no new construction was permitted. This did not leave the parish community a lot of options for worship.  In the colder months they either assembled in the barn (alongside a makeshift wall of hay bales for insulation) or if it got too cold, they wedged their way into the cramped front room of the farm house/rectory. In warmer months, the barn provided shade and 'natural' ventilation or the community assembled in the 'open air' in front of the farmhouse (and used the hay bales as pews).

But who decided where they would assemble?  The pastor?  The assembly?  One story has it that a family of snakes sent people scurrying out of the farmhouse (windows included) when they began coming up through the floorboards. Hibernation was 'officially' over and the snakes were seeking warmer climes. 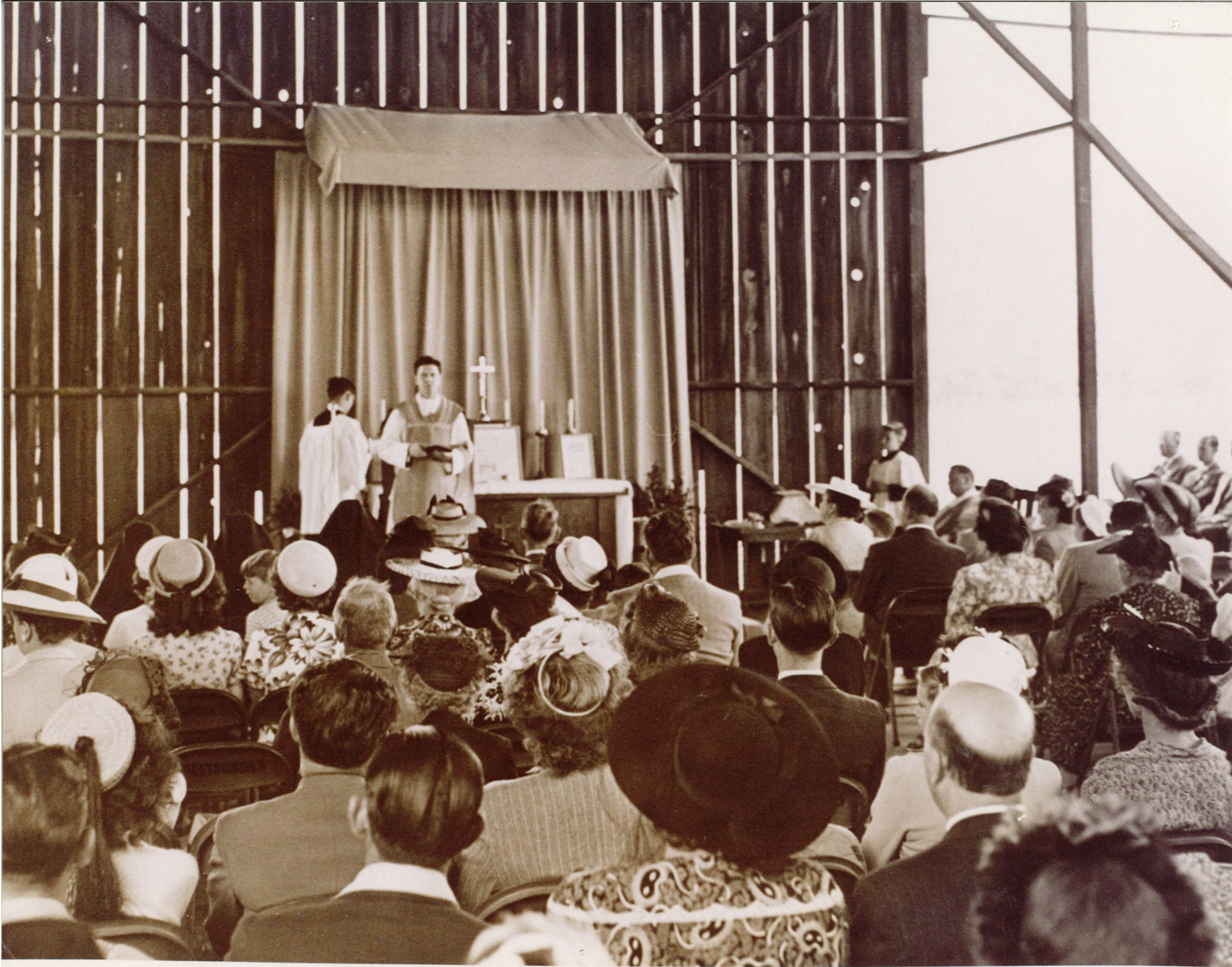 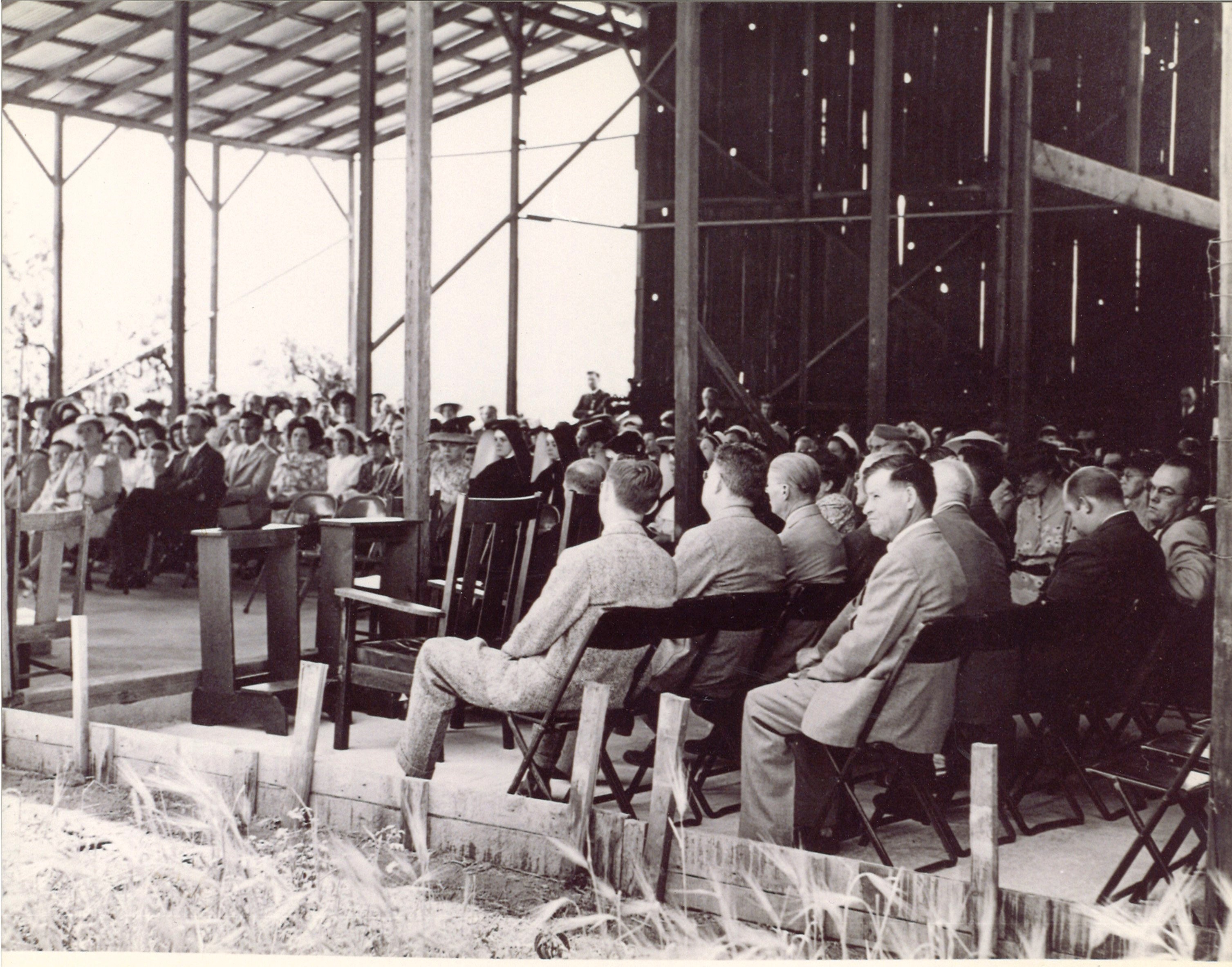 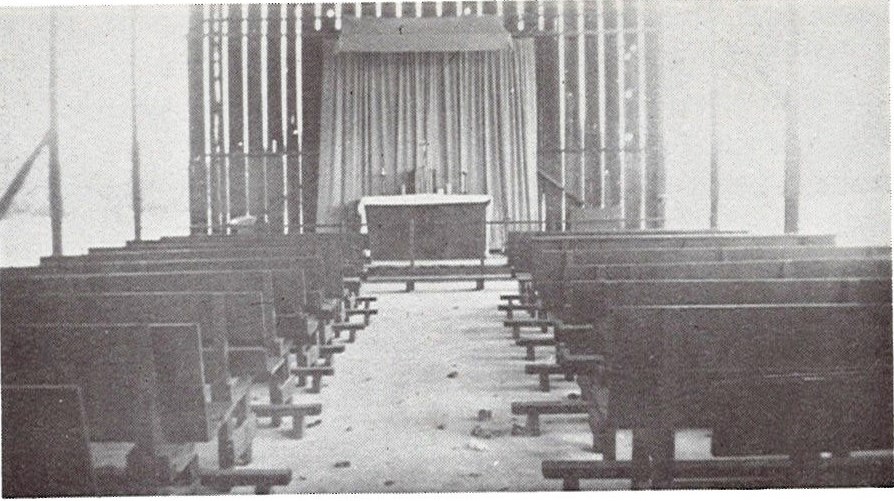 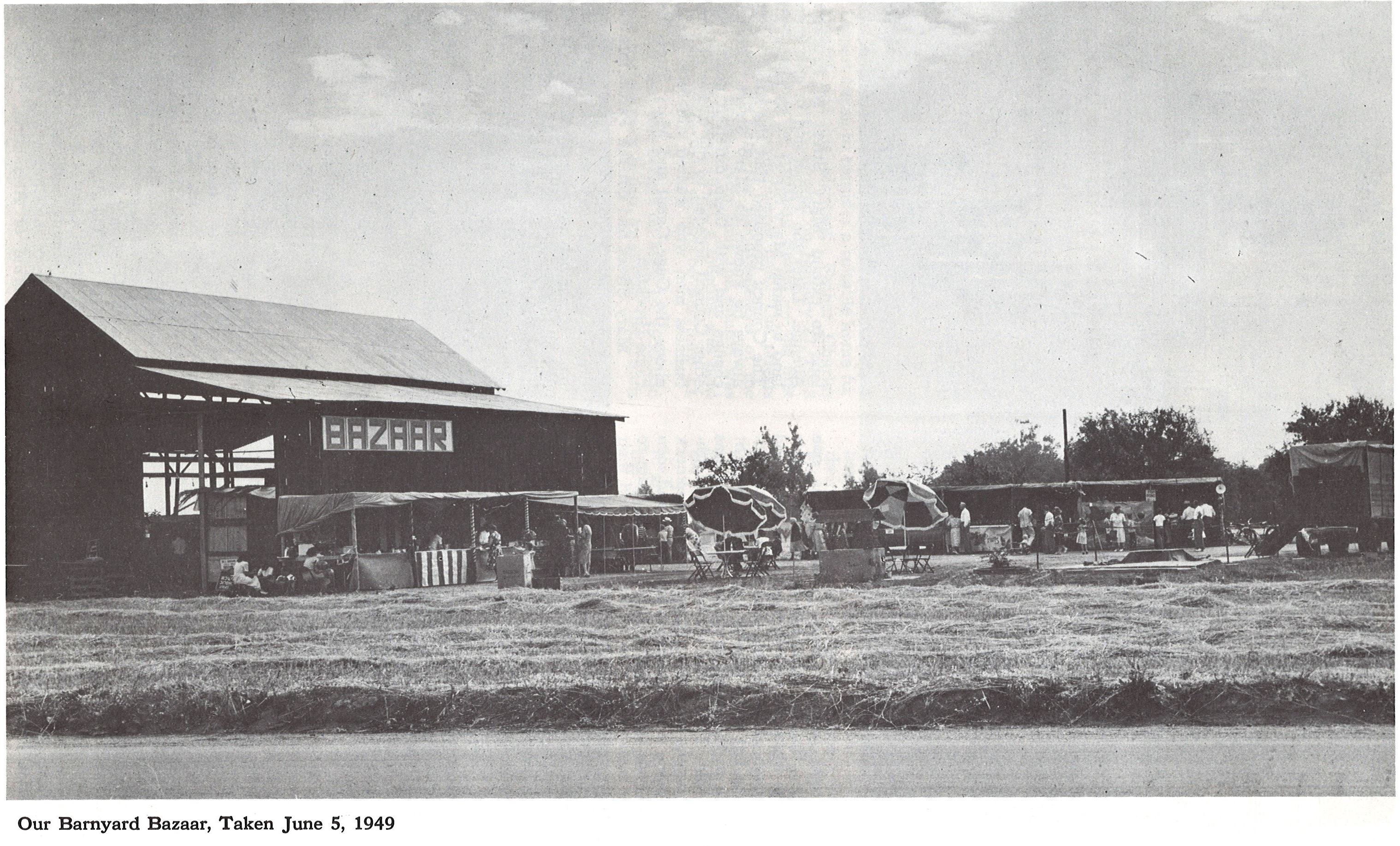 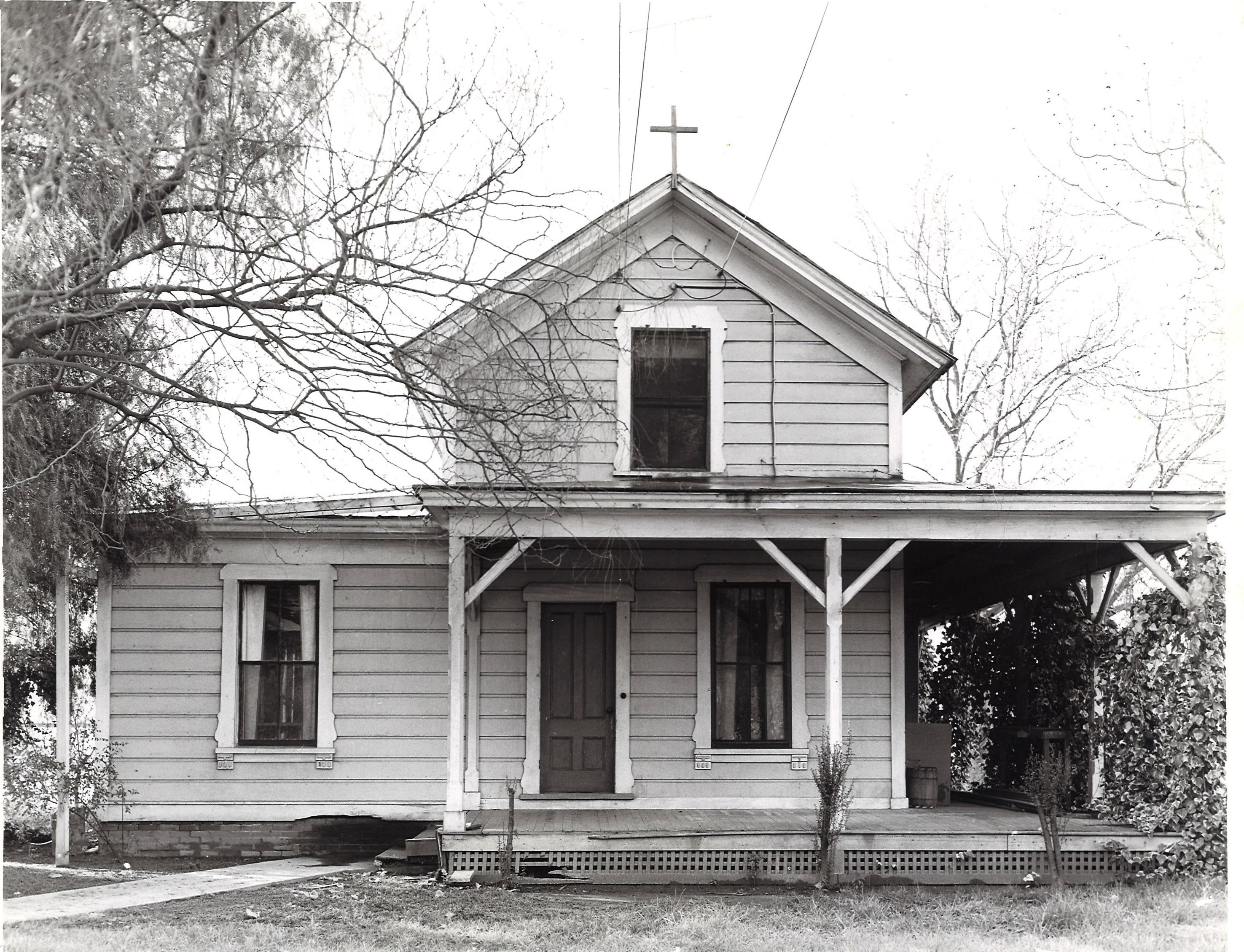 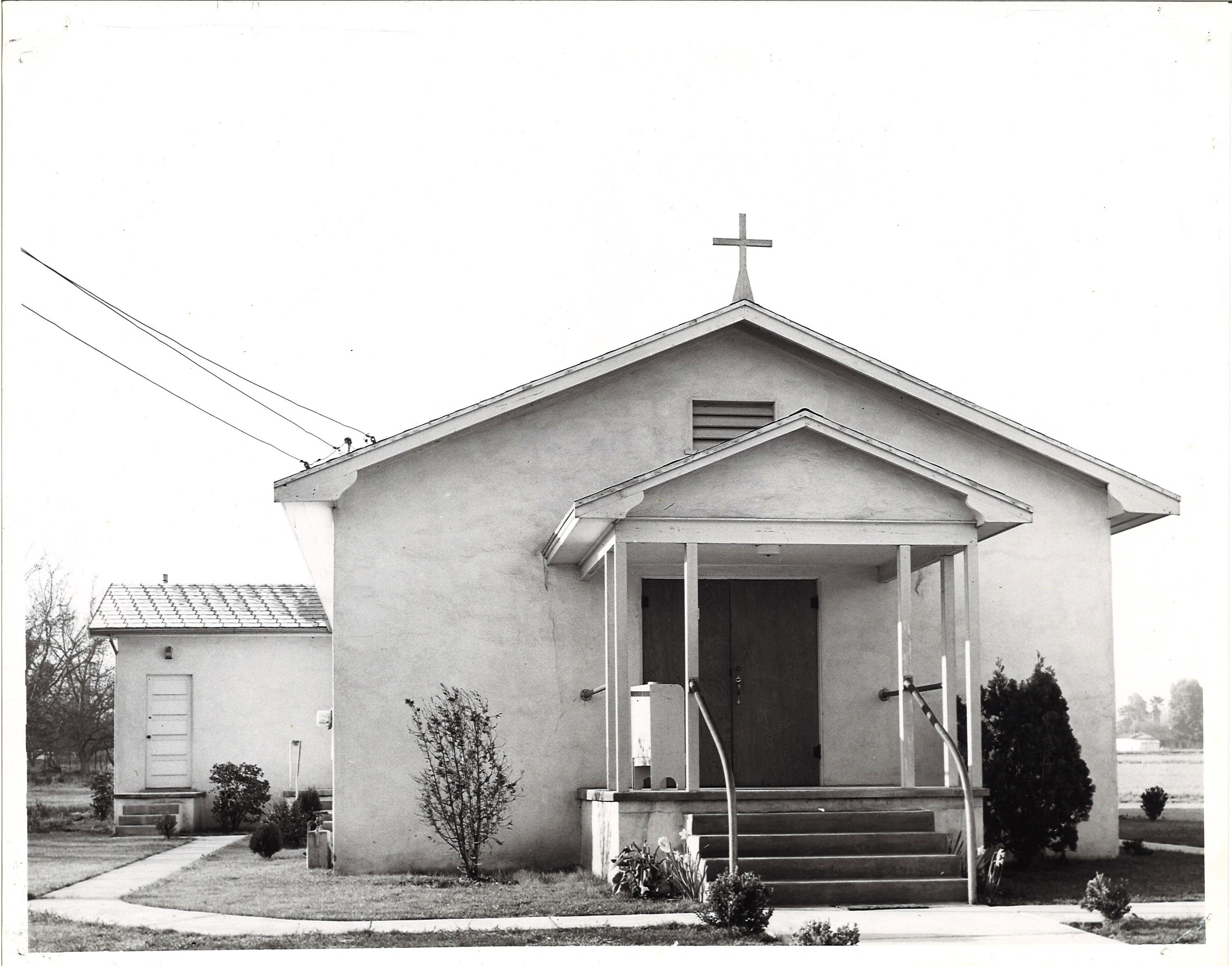 In 1948, Fr. Paul Lippert, CS Sp, 3rd pastor, applied for a grant from the Catholic Extension Society, to pay for a surplus building from Camp Haan Army Base in Pedley. This became the third  'church' for the parish and after its dedication, it was re-named St. Catherine of Alexandria Church (after a donor to the Extension Society). This church would serve the parish community for about ten years before it would be moved to the school side of Brockton Avenue to make way for construction of the 4th and current church.

The Camp Haan church would be used as a hall and administration building for St. Catherine school (until its demolition in 1999). Plans for a parish school had been in the minds of every pastor since Fr. Joseph Murphy, CS Sp, but the building moratorium had thwarted their dreams.

In 1953, Fr. Sylvester F. Dellert, CS Sp, received permission to begin raising money and ground was broken for the construction of the parish school. Fr. Dellert, CS Sp, however, would leave St. Catherine parish before realizing its completion.

In 1954, Fr. Daniel P. Bradley, CS Sp, the 'builder priest' from St. Monica church in Tulsa, OK, was asked to oversee the construction of the new school, church and convent. Under his watchful gaze, the school and convent were built entirely by volunteer labor and dedicated on November 22, 1954.

Initially three Sisters of St. Francis of Clinton, Iowa were hired to teach at St. Catherine school, but by the time of the school's opening an additional three were added to the faculty. This meant that the brand new convent would undergo additional construction and expansion almost immediately. 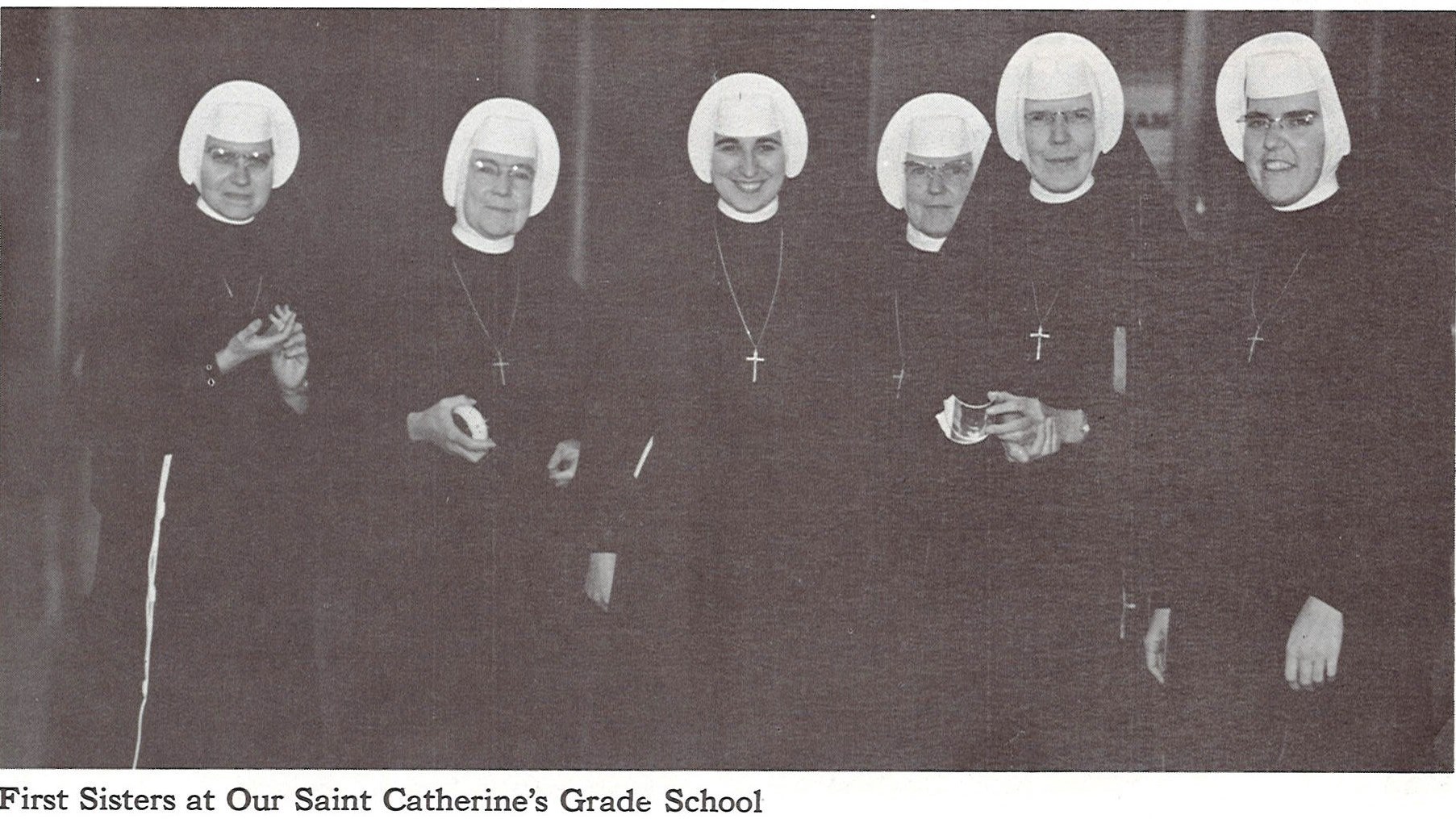 The first enrollment (fall term) was 425 students and the religious sisters were assisted by four lay teachers and three Servite priests from Our Lady of Riverside Monastery (now home to Teen Challenge). The school has been in continuous operation ever since.

With the school and convent completed, Fr. Daniel P. Bradley, CS Sp, fifth pastor of St. Catherine of Alexandria parish broke ground on April 22, 1956, for a new 'basilica-type' church. It cost $250,000 to complete the structure and, according to records, sat 1,000. 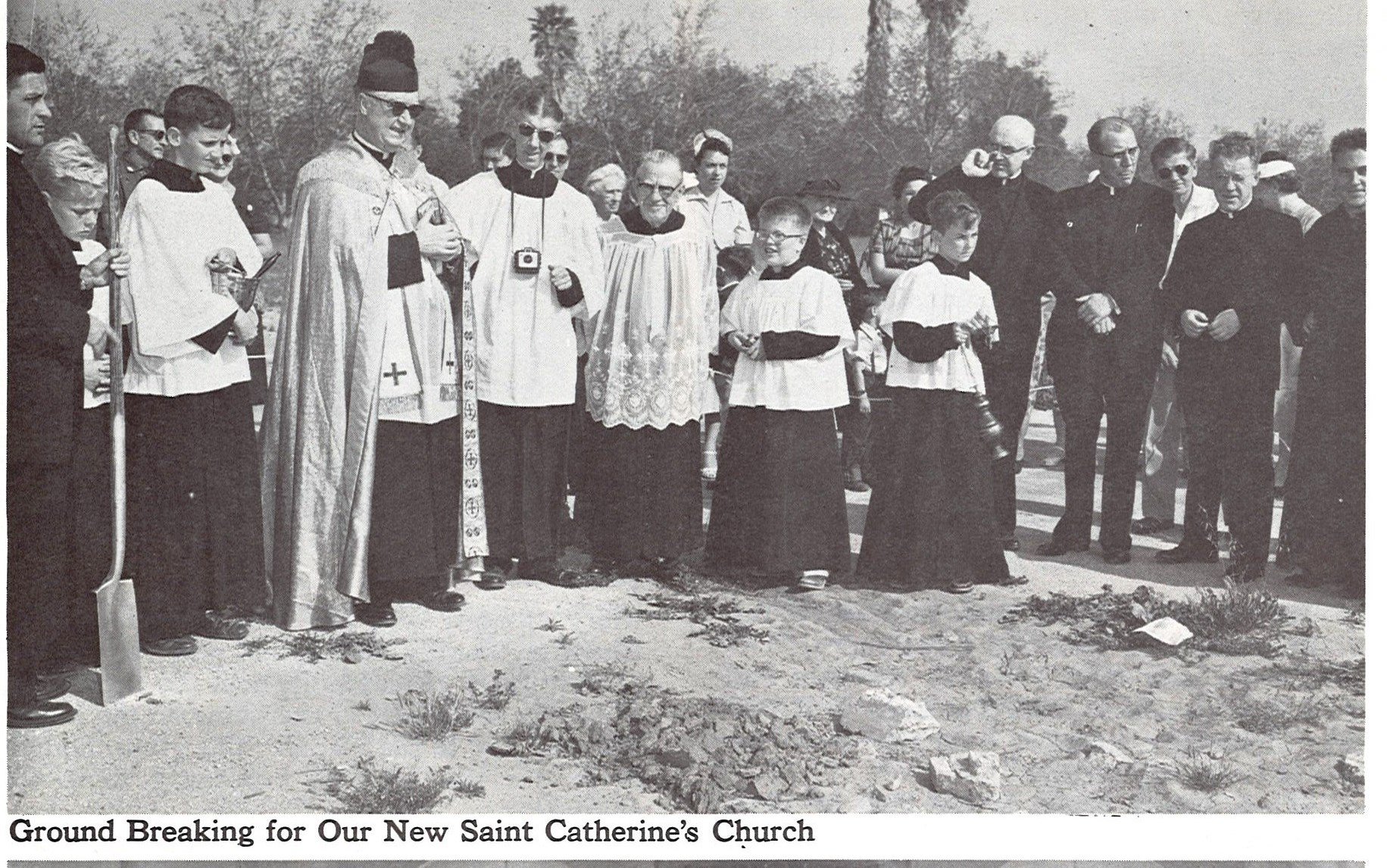 The new church was dedicated in 1957, with much fanfare and hoopla, despite the fact that the stained glass windows had not yet arrived and been installed. As a result, pigeons (some say, the Holy Spirit) were frequently present for the liturgies until the windows were put in place the following year. With the building program completed, Fr. Bradley, CS Sp, bid the parish goodbye and went on to his new assignment.

In 1956, Notre Dame Preparatory School (for boys) opened. The following year the Holy Ghost fathers took over its administration and changed its name to Notre Dame High School. The school would later go co-ed after merging with St. Frances de Sales High School in 1972.

Fr. Kirby arrived in September 1958. Under his six-year term as pastor he oversaw the 'clean up' work left by Fr. Bradley. This included the installation of the windows in the church, landscaping of the church and parking lots. St. Catherine was now looking respectable.

Moving Forward To Today and Beyond

The Holy Ghost Fathers would remain at St. Catherine until the Diocese of San Bernardino was formed in 1978. Then, they turned over the parish they had nurtured so lovingly and moved on to their next assignment. They had accomplished everything they had set out to do. St. Catherine was no longer a mission parish and the families they had initially come to serve had moved on.

St. Catherine was ready to stand on its own. And we did. Fr. Robert J. Erickson would become the first diocesan pastor at St. Catherine and Fr. Thomas J. Burdick would be the last. We would see the introduction of Parish Coordinators and be embraced once again, in 2005, by a religious order, pastored by Fr. Thomas Burns, MSC (Missionaries of the Sacred Heart).

And these pastors kept the parish growing and renewing itself, with capital campaigns to renovate the school, the hall and the old convent (now the ministry center) and our annual Diocesan Development Fund (DDF) drive to repair, remodel and make additions to our church and properties. But they could not have done it alone. The people of St. Catherine of Alexandria parish, remaining steadfast in their faith, have responded to the call to lay involvement by Vatican Council II and are active in ministry and outreach to the community and world.

As we move forward into our next 60 years, we need to draw strength from our past and embrace our fellow brothers and sisters in Christ with a greater sense of our universality as a faith and witness to the world our Lord's call to mission: Go. Make disciples of every nation. Baptize. Proclaim the Good News to the whole world.
CLICK TO EDIT